Summer Makes It So Easy

I did my first visual/songwriting collaboration!  Amazing artist, and longtime friend, Brian Demeter, just completed a series of paintings titled Oceanus that I used as inspiration for a song.


I kept the chords simple; I imagined it being played on the beach around 5:30 p.m. with the air extra breezy but just starting to cool off.

Click here to see all the paintings from this gorgeous series.
Posted by iamemma at 9:18 AM 4 comments:


I see that there are pregnant bloggers all over the internet right now and, being a well-seasoned mother for, ummm, over two years, (okay, okay.  I also was a nanny and a storyteller for a bookstore so I have a few credentials, okay?) I feel inspired to share some of my favorite bedtime storybooks.  There are a ton, of course, but here are a few of my top four:

Ten Apples Up on Top!

This book is awesome. It's funny, teaches counting and has a lion in it.  It was actually written by Dr Seuss (under the pseudonym of Theo LeSieg).  My baby LOVED this book so much, even when he was super-tiny.

This is the first in a series of books is so delightful - sweet, simple and quirky.  The spare look of the illustrations does a wonderful job of keeping the attention of babies (and mamas and daddies).

Sandra Boynton can pretty much do no wrong when it comes to books.  Her books are SO funny, quirky and super easy-to-read.  This one is kind of the most basic and shortest of her books but Peter had this memorized early (he also adores Let's Dance, Little Pookie).
Posted by emma wallace at 9:58 AM 83 comments:

Six Songs that Never Cease to Make Me Happy


Call them guilty pleasures (although I never would - pleasure, definitely, guilty, never), call them whatever you want.  These are six songs (of a rather extensive playlist) that make me happy.  Just the opening notes can be enough to help me shake off a less-than-desirable mood.  What are your go-to get-happy songs?

I love the fact that there are twelve new beginnings every year.  Who needs a new year?  (Well, I like it once a year, of course.)  So at the beginning of every month, I start ANEW!

My New Month Resolution is to meditate every day.  Every several days I read a new article about how wonderful meditation is for you, from disease-fighting and staving off arthritis to increasing calmness and empathy.

Though I have meditated off and on for years and always at the end of a yoga practice, I would really like it to be as second-nature as, I don't know, eating a treat with my coffee.

Anyone else up for doing a challenge?

Happy New Month!
Posted by emma wallace at 9:19 AM 2 comments:

Sally created a new fanvid of one of my Song Sketches.  And it is gorgeous! Dreamy, delightful and romantic.
Thank you so much, Sally!

It's the Most Wonderful Time of the Year...


So, I've done a lot of talking about how I'm going to do this awesome 60s spy c.d. and everything and have been working (and working) on it in my own little studio since the beginning of January.  Only thing is, the dominant features of 60s spy music are features that I cannot do in my own little studio.  Even when working (and working).  So I'm going to heave a sigh and heave those songs I wrote up to the shelf to wait for when I can have a baritone electric guitarist, some horns, a percussionist and some strings to help me.  And start working on the following project which is my...

Holiday c.d.!  Yes!  I am aware that it is a wee bit early to be thinking on those terms but I'll strengthen my resolve, resolutely drink copious amounts of hot chocolate under a ceiling fan while getting into the spirit of the (faraway) season.

Thank you all for your patience as I skip to and fro between project ideas!
Posted by emma wallace at 10:14 AM 1 comment:


I was telling my mother, elatedly, that I'd figured out a technique to keep me from losing my temper with my very, shall we say, spirited 2-year-old.  After I got her expected kudos, I finished, on a down and, 'realistic' note,
"Of course I'll probably still lose my temper a lot anyway."
And she said, "Why?  Maybe you won't."

The tiniest bit of thrill ran through me.  Maybe I wouldn't!  At some point, I'd needed a sippy cup to drink without spilling juice, a step stool to reach the sink when I washed my hands and a fire alarm ready and waiting whenever I cooked rice (true story: I set off the fire alarm at my dormitory during move-in day when everyone was halfway in and out with boxes and furniture.  Obviously, I never claimed the charred pot as my own).  The reasons are all different - I'm better at drinking juice now, i am tall enough to reach the sink on my own and my husband does the cooking.

Tony Robbins says that the past doesn't equal the future and that's a pretty liberating thought.  I mean, we never KNOW what will happen to change!  Sometimes it's so hard to see, not only in our own lives, but in the world at large, but things do change.  People used horses to get around town! Women never used to be able to wear pants.  Cell phones were a luxury a few power players could afford.

Receive My Blog as an Email! 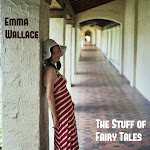 I've Heard My Newest Record Is Quite Delightful... 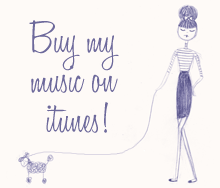 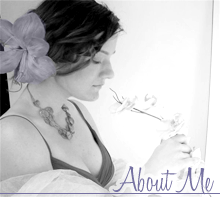 A maker of songs for those wearing rose-colored glasses, those who love life and happy endings.

For persons who prefer their artists tortured, I fear I am not your cup of vodka.